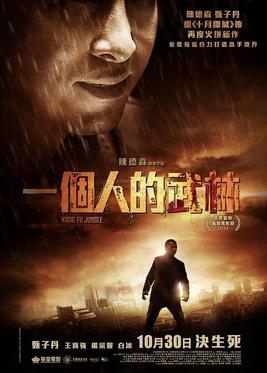 Kung Fu Killer (also known as Last of the Best and Kung Fu Jungle) is another Donnie Yen action vehicle from Hong Kong. Apparently, it has won a bunch of awards, including one for action choreography. That one, I can understand. As with most – though not all – Donnie Yen movies, this has great action. Everything framing that action? There’s the rub.

So Donnie Yen’s character, a martial arts master named Hahou, turned himself in when he beat someone to death and starts the movie in prison. While he’s on the inside, someone starts hunting down masters and killing them using their own style. Hahou contacts the police and makes a deal to help them hunt down the killer.

The framing story is pretty convoluted and honestly doesn’t bear much scrutiny, nor does the movie’s own internal logic really help. I mean, I read that it won some awards, so someone is digging its narrative vibe, but I didn’t find the story compelling.

And who cares? The fight scenes are imaginative and kinetic. One of its awards was for fight choreography, and that I can agree with. The storyline allows scenes with different fighting styles – like certain weapons or specific open hand/foot techniques – which I like. Many of the scenes don’t include Donnie Yen, which I generally consider a mistake, but the action is always excellent.

This is from the director of Bodyguards and Assassins, another Donnie Yen movie in which he is the star but doesn’t bear all the action workload. Like that movie, Kung Fu Killer’s action doesn’t let up, even when it isn’t Donnie Yen laying on the beat-down.

I give Kung Fu Killer 4 bamboo poles spilling out of truck on the freeway out of 5. The action is excellent, but the framing narrative isn’t so hot and that can make the movie drag in some places.

You can find out more about Kung Fu Killer at IMDB and Wikipedia.

You can find out more about Bodyguards and Assassins at IMDB and Wikipedia.